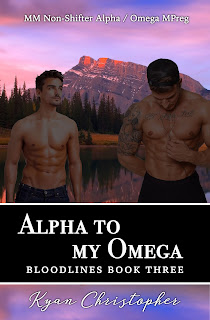 Alpha to My Omega

Taylor has always been the party-boy alpha. His lifestyle was one of fun and games until an accident forced him into a stay at Galothside, the prison made by the Gryphon Council to maintain order throughout the pack. But after his release, can Taylor make his life anew, or will old friends and familiar ways land him in trouble once again?
Dillon can't seem to escape the devastation he feels after the mix up with Callum. Embarrassed and feeling alone, he finds himself on a destructive path that may cause more pain than he could have ever imagined.
While the two could turn their collision into a positive change, they may just end up destroying one another instead.


Mated & Bound to My Omega #paidlink

Loved by My Omega #paidlink

Here's a taste from book one:

Griffin moved a hand to his head as blood rushed up his neck, causing a pounding in his ears. Despite the dizzy spell that hit, he tried to focus on the paperwork in front of him. Pressing in on his temples with his fingers, he willed the pain away as he massaged the sides of his head. Almost as quickly as it had arrived, the pressure left and the world around him snapped back into focus.

A soft knock on his office door was followed by a sweet-sounding voice. “Mr. Parker?” The door cracked open and Terri’s bright smile filled the space.

“Yes,” Griffin said, moving his hands back to the desk and picking up a pen in front of him, attempting a look of normalcy.

“There’s a gentleman here who would like to discuss a business loan with you. Do you have a moment?”

“Of course, send him in.” Placing the pen back down, Griffin stood from his leather chair and walked over to the doorway as Terri opened it wider.

“Mr. Riley, right this way,” Terri said, ushering the man through the door.

“Griffin Parker,” Griffin said as he thrust his hand forward.

“Keegan Riley.” The young man placed his hand in Griffin’s, gripping it tightly and shaking it firmly.
“Please,” Griffin said, directing Keegan to an awaiting chair in front of his desk. “Have a seat.”

Keegan sat down while Griffin made his way back to his swiveling high back. Once seated, Griffin inspected the man. He looked to be in his late twenties. Jet black hair reaching his lower earlobes framed the strong features of Keegan’s face. He was clean-shaven and wore a pair of black-framed glasses that gave him a hot, nerdy boy look.

“How can I be of assistance?” Griffin asked, grabbing a notebook from a nearby stack of papers.

The younger gentleman looked nervous but was trying to act as though he wasn’t. He squared his shoulders and looked Griffin straight in his eyes. “I’m looking to start a business and was hoping your bank could help me with a loan to supplement my existing capital.”

“What type of business are you looking to start?” Griffin asked while writing a few notes on the pad.

“A bar,” Keegan said, his eyes taking on a new luster as he talked about it. “A tavern, really.”

“Really?” Griffin moved his eyes from the paper to study Keegan again. Keegan didn’t look like a bar owner. Not that Griffin would make the presumption out loud. Everyone had a right to be who they wanted to be, but something about Keegan didn’t scream bartender to Griffin.

“Yes,” Keegan said, pulling out a folder from the satchel he was carrying. “I’ve inherited a space from a family member and believe it would be a perfect spot.” Keegan opened the folder and pulled out a small set of photographs from the stack of papers within. Handing them across the desk to Griffin, he continued. “The space is a commercial property on the outskirts of town. It’s within the city limits, but in an area that could enjoy the products I want to offer.”

“I’d like to remodel, obviously. My father used it as an investment property. The most recent tenant closed their business a few months ago. Rather than renting it out again, I thought I could make a go at running my own place.”

“Do you have a business plan?”

“I do,” Keegan responded, pulling out another set of documents and passing them to Griffin. Griffin took the papers and glanced over Keegan’s plans. Mostly, the documents were straightforward. The plans outlined the potential market, startup costs, and inventory requirements.

“Looks like you’ve put a lot of work into this.” Griffin put the papers in a neat stack and looked across the desk at Keegan. “How much are you looking to borrow?”

“I have about twenty thousand in savings, but I don’t believe that will be enough for me to remodel and purchase the inventory I need. Based on my estimates, I think another seventy-five thousand should get me up and running.”

“Seventy-five,” Griffin repeated, picking up his pen again and returning to his notepad. “And what type of collateral are you thinking of using?”

“I own the space free and clear,” Keegan said. “I’m sure it should appraise at more than enough to cover the loan.”

“I tend to agree,” Griffin said. “But don’t hold me to that before the appraisal is final. I don’t want to make you a promise I can’t keep. Let’s get an application started, and I’ll get Terri to copy your business plan for our files. Sound good?”

“Great. I’ll be right back.” Griffin stood and walked to the door, taking the small stack of papers and photographs he’d gathered from Keegan during the brief meeting. After a conversation with Terri, he came back and typed on his computer.

Keegan sat in silence, watching Griffin move through various screens of the system. He spoke only when Griffin asked questions, afraid he might jinx the process if he interrupted it. Terri stepped into the office, placing a folder on Griffin’s desk and handing Keegan his documents and pictures.

“Thank you,” Keegan said as he took the stack from her.

“You’re welcome,” she replied. “Can I get you anything to drink?”

“I’m here if you change your mind.” Turning to Griffin, she added, “I’ve got those copied and scanned to your drive.”

“Thanks, Terri,” Griffin said, picking the file up and flipping through several pages of the business plan before returning to the keyboard.

“Let me know if you need anything else,” she said before heading for the door.

“I think I have everything in order,” Griffin said, turning to Keegan. “I’ll get an appraisal ordered, and then, pending a good report, we can get everything finished up. Will you be available to meet with an appraiser this week?”

“Let me give you my cell number.” Keegan rattled off the numbers as Griffin captured them on a post-it note and stuck the number inside the new file.

“I’ll get Terri right on it, and we’ll get something set up. You should hear from us by tomorrow afternoon.”

“Thank you so much.” Keegan stood and offered his hand to Griffin.

“I hope we can help,” Griffin said, taking Keegan’s hand. A rush of heat raced up his arm and his blood pounded in his ears again. Griffin released Keegan’s hand and raised his fingers to his temple.

A worried expression crossed Keegan’s face. “Are you okay?”

“Okay,” Keegan said. “Thanks again.” He walked out the door, and Griffin heard Terri saying goodbye. Taking a seat, he moved his fingertips back to the sides of his head. What the hell was going on with him today?

Griffin picked up the folder with the color photocopies of the space Keegan was using for the bar. He looked at the brick walls and imagined Keegan standing behind a bar settled in front of the wide expanse. A mirrored backdrop reflected the dozens of liquor bottles lining glass shelves as Keegan poured his new patrons a drink. Hell, it might be a nice place for Griffin to hang out. Especially if Keegan would be manning the bar.

Something about Keegan was mesmerizing. Griffin couldn’t stop imagining his face. The lines of his jaw and high cheekbones gave him an almost effeminate quality. But his eyes…those bright, sparkling green eyes. They seemed to pierce right through Griffin’s gaze as he sat across from him.

As the day progressed, thoughts of Keegan didn’t dissipate. The drive to the gym, a quick dinner at home, and an hour in front of the TV didn’t take his mind away from the dark stranger. Even in his sleep, Griffin dreamed of Keegan. It was almost as if a new obsession had taken over Griffin’s mind.

Even his dreams betrayed him. Griffin’s subconscious wanted to know what this new, sexy nerd in his life looked like without the shirt and khakis he’d worn to the bank.

“Damnit.” Griffin rolled over and pressed the button on his phone to stop the noise. “Just when things were getting good.” He groaned, rolling out of bed and heading to the shower.

Once he’d put on his suit and was ready to step out the door, his cell rang. He grabbed his keys before swiping the phone from its resting place and rolled his eyes before answering.

“I was just calling to see how my favorite son was doing.”

Griffin laughed. “Not at seven in the morning. You’re up to something. What is it?”

“I’m not up to anything. Maybe I should ask you what you’re up to…” Her voice was singsongy and full of mischief.

“I’m heading to work, like most people at this time of the morning.”

“Will you see him again today?”

“Mother, what are you talking about?”

“You may pretend you’re not one of us, but don’t play coy with me.” She was right, and Griffin knew it. No matter how much he wished it wasn’t true, she always knew.

“It matters,” she said, cutting him off. “You’re almost forty. Time is running out for you to find your one.”

Griffin sighed as he walked out the front door and to his car. “Mom, you know I don’t care about any of that.”

“Griffin, you have responsibilities, like it or not. It’s time you got over this—this…whatever it is you’re going through—and take your rightful place in the family line.”

“Griffin,” she said, resigning to drop her motherly tone. “You know I want what is best for you. I want to see you happy, in love, and starting a family.”

“I love you, sweetie. Have a safe drive and a good day at work.”

Griffin hung up the phone. His mother didn’t bring up their heritage often, but as he got older, she had begun slipping things into their conversation more often. Things that Griffin decided a long time ago wouldn’t be a part of his life. Why did god have to allow omegas to feel the emotional connections of their family. It was hard to forget about the life you were trying to leave behind when your mother could tell every time I was interested in someone.

Besides, he didn’t even know if Keegan was into guys. He’d formed a fascination based on a meeting with a guy who he would only see a few more times. Griffin needed to find a normal guy to settle down with. Someone who would share his life and not worry about his past. Someone who wouldn’t care that he didn’t want to take the place of the reigning pack alpha.

Posted by Kyan Christopher at 8:00 AM